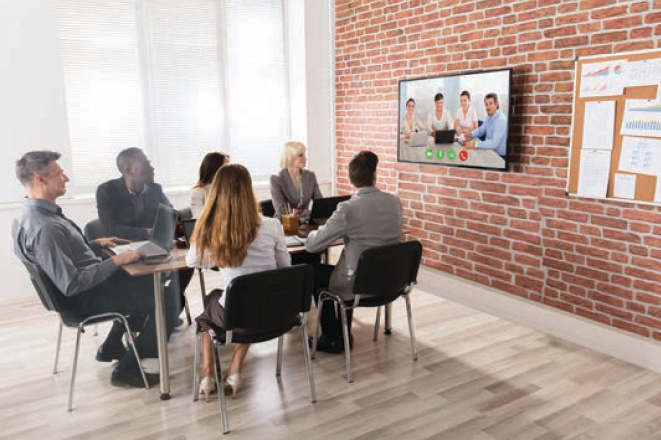 The future of work is agile. It’s intelligent, driven by smart, connected systems and devices. It also doesn’t care as much as employers used to about where people work or what devices they use to get things done.

Amid these shifting tides of the way we work, many traditional companies have struggled to stay afloat. That certainly seems to

be the case for traditional video conferencing companies, whose hardware used to be ubiquitous in the conference rooms of enterprises across the globe. While these systems may still be in place today, many are reaching end of life.

This, coupled with the changes in the way organizations operate, leads one to question whether there’s still a place for traditional video conferencing infrastructure in the modern and future workplace. New cloud-based solutions, after all, are meeting companies’ needs for flexibility and cross-border collaboration.

As with any disrupted industry, though, some legacy players will survive the turbulence by integrating with new technology, as well as going back to the drawing board to revamp their products and services.

Video as part of a collaboration ecosystem

Digital adoption and a new generation of workers and entrepreneurs have drastically changed the modern-day workplace. For starters, 62 percent of today’s workforce are already working from anywhere, according to the Future of Work study by Polycom, a provider of video, voice, and content solutions now owned by Plantronics.

There’s also a larger emphasis on collaboration, advocated by startups and manifested in the proliferation of open-plan offices in recent years. But that, in turn, has spurred by a push-back from employees and academics; workers complain of the numerous distractions they experience due to the lack of privacy.

As a result, more organizations are building huddle rooms—small meeting spaces that can accommodate only four to six people. In fact, Frost & Sullivan estimates that there are now 32.4 million huddle rooms worldwide.

“Led by the more collaborative culture of millennials, organizations are seeking to increase the numbers and types of collaboration spaces that are available to their teams. This results in a greater number of huddle rooms, video ‘phone booths’ and tools for mobile collaboration,” says Roshan Gupta, Regional Director for India of ZiipRoom, a maker of productivity and connectivity software for meeting rooms.

Apart from video- and audio-conferencing tools, huddle rooms are increasingly being equipped with collaboration technologies like digital whiteboards and content-sharing platforms, especially within companies that employ remote staff or work with partners in different cities and countries.

Many millennials, who will comprise 75 percent of the global workforce by 2025, are more comfortable doing work on different devices than their previous generation. They’re also more comfortable on video, says Gupta. This level of comfort, though, may be even higher among Gen Z—digital natives who are now entering the workforce.

and wherever they may be. However, with their reliance on specific hardware and IP address connections, traditional video conferencing tools require users to be physically present in the room where the infrastructure is installed. They don’t allow participants to connect to the video conference with their own laptops, and most require the other party to use the same technology.

They also don’t come with collaboration and productivity features. In this aspect, traditional video conferencing tools simply can’t compete with the likes of Skype for Business, G Suite, and Office 365. These cloud-based Software-as-a-Service (SaaS) suites, developed by technology giants, include audio and video calls, content sharing, and real-time collaboration.

For instance, while speaking via Hangouts, people can see and edit the same spreadsheet on Google Sheets. Office 365 offers participants HD video, a shared workspace, a digital whiteboard, file storage and sharing, and more than 140 integrated apps and services. Because they’re hosted on the cloud, these SaaS tools can be used seamlessly across different devices.

Cloud-based video conferencing services are also riding the tide of innovation in sectors like education and healthcare, where they can make a huge impact. “For instance, parents would love to see their ward performing at school’s annual day live- streamed on their mobile devices if they are unable to make it to the school,” says Gupta.

Similarly, Zoom’s app marketplace, which was launched in October 2018, allows for integration with learning management systems for delivering online courses. It also works with popular services such as Slack, Hubspot, LinkedIn Sales Navigator, and others.

Video conferencing may also be used to improve the quality of medical care in rural and disaster-stricken areas. “Medical staff have also benefited from quicker knowledge transfer during incidences of natural disasters or disease outbreaks, and can collaborate more closely with counterparts in the cities,” says Mei Lin Low, Polycom’s Director, Solutions Marketing, APAC.

These SaaS capabilities for multi-device operation and app integration support the future workforce’s need for agility and collaboration—with no space in the picture, it seems, for traditional video conferencing tools.

A lifeline for traditional VCs

There is, however, a way for traditional video conferencing tools to be integrated into today’s huddle and conference rooms, as well as personal devices. Unified communications (UC) technology, offered by the likes of ZiipRoom and Polycom, allows different video conferencing software to work together. That means people participating in the same video call may use different software.

“We know that many enterprises still have hardware endpoints in their conference rooms and are remiss to throw away these investments when starting their Zoom subscription,” says Tien Tien Sin, Sales, South East Asia, of Zoom. Many have thus partnered with cloud-based video software and UC service providers. Today, says Gupta, the average enterprise uses four to six UC platforms.

“You can already see that many companies are developing products which are cross- platform compatible,” adds Christopher Lim, General Manager of ESCO, a systems integration and distribution company that represents Zoom in Asia.

Another—and longer-term—solution is to revamp one’s products and services. Take for example Polycom, which was launched in 1990 and initially sold audio conferencing speakerphones. Over the decades, it acquired a string of companies in the audio and video conferencing space and built an open collaboration network, eventually launching a UC platform.

The future of video conferencing

Such interoperability is key to the survival of video conferencing solutions—both traditional and cloud-based—in the future workplace where multi-vendor environments will be the norm.

Low explains that enterprises that use both traditional video conferencing systems and Video-as-a-Service subscriptions will thus demand more flexible management tools. These will help them ensure consistent quality while minimizing costs.

As Gupta puts it: “You cannot force your ecosystem of customers, partners, suppliers and service providers to only use the platform you’ve selected.”

But apart from simply being able to work with different conferencing software, video tools also need to have collaboration and productivity features, or at least integrate with apps that offer them. This is crucial as workforces become more geographically dispersed and seek tools that allow them to work together. That means the future of video conferencing is largely cloud-based.

It will also incorporate the use of artificial intelligence for personalization and automation. This includes the ability to offer intelligent face-detection and voice triangulation cameras, simple click-to- join experiences, and AI-driven calendar scheduling and note-taking capabilities.

Plus, with the scalability and affordability of cloud-based solutions, more huddle rooms will be equipped with audio and

“As compared to seven or eight years ago, the cost of setting up a VC room has come down considerably. Now you see packaged solutions in a box that can be shipped and set up easily. Basic huddle room set-ups are now so inexpensive to deploy and scale that for the first time, it actually makes sense from a financial perspective on an enterprise level,” says Lim.

In addition, the improvement of broadband networks across Southeast Asia will drive adoption of video conferencing technologies across the region.

In the end, though, it all boils down to user experience. “We believe that video collaboration is the next best thing to in-person meetings and discussions. The immediacy of video, and its ability to convey rich human emotions and reactions will facilitate more impactful discussions and quicker decision-making,” says Low.

Customers will expect ease of use wherever they work. “We see video moving from just formal room-to-room meetings to frictionlessly bringing people on mobile devices, desktops, and meeting spaces all into the same virtual environment, no matter their physical environment,” says Sin.

Adds Gupta: “When video conferencing is as easy and valuable as their other productivity apps, [people] will use it.”