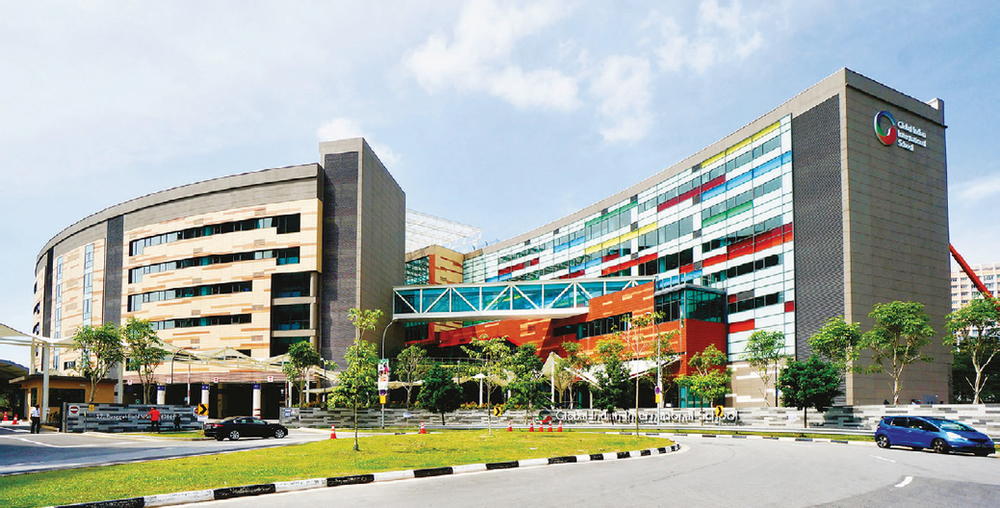 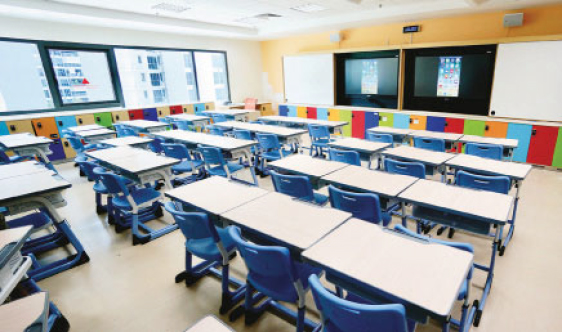 WITH PRIVATE INTERNATIONAL SCHOOLS IN JAPAN, THE UAE, India, Malaysia, Thailand, Vietnam and Singapore, the Global Indian International School (GIIS) is well-versed in the field of global education. Now, a new campus built from scratch in Singapore – which boasts one of the world’s highest-ranking education systems – has replaced two of the five existing facilities at different locations across town with a single, modern and smart centre for NextGen Learning.

Naturally, AV technology is crucial for achieving such an ambitious goal, and this presented an opportunity to equip a new construction rather than upgrade dated premises. After successful completion of a previous GIIS project in Abu Dhabi, Bangalore-based T2 Consulting was again tasked with handling AV for the new Singapore campus, with local systems integrator ESCO installing and commissioning the project. ‘In addition to our references, I think we impressed the client and T2 with our commitment to assign a dedicated, well-experienced team to the project, and with our constructive input on potential optimisations,’ recalls ESCO’s general manager, Christopher Lim.

The building consists of two slightly curved blocks with six and seven storeys, respectively, connected by catering and event spaces on one end and a glass-encased footbridge on the other. Beyond the visitor centre at the entrance, it provides 90 classrooms, science labs, music and arts rooms, plus multiple indoor sports facilities and auditoriums and a number of open learning spaces for more than 3,000 students, educators and staff.

For all data, a fibre-based 40Gbit/s LAN was installed throughout the entire campus with connectivity for over 6,500 wired devices, in addition to 250 Wi-Fi access points. This provides teachers and students with highspeed internet as well as broadcasting the exact time and school bell, playing an important role in security as well as building management and energy control, and delivering digital signage to hundreds of displays. With several Biamp AudiaFLEX, Nexia and TesiraFORTÉ DSPs at its core, the system transports audio by means of CobraNet.

‘It’s not the typical AV network; it’s a very complex, IT-driven coexistence of AV with many other clusters of data,’ says Amit Palekar, vice president of sales at ESCO.

‘The variety and number of services running on the network requires it to be highly advanced,’ confirms Alan Oliveiro, ESCO’s technical support manager, solution delivery, who oversaw the AV installation. ‘For instance, teachers register their attendance through a facial recognition system, which takes up a lot of bandwidth, while some services, like the IP clock providing the exact same time all over the campus, caused compatibility issues.’

Indeed, some problems prevented CobraNet from working during installation. ‘It took us a while and the help of some IT experts to find the reason,’ says Oliveiro. ‘All network switches here are Layer 3 while CobraNet uses Layer 2, meaning you have to keep things separate and not mix them. We managed to get around it by utilising a virtual LAN (VLAN) exclusively for CobraNet, keeping it free from any other traffic.’

Each of the classrooms, science labs and open learning spaces, some with capacity for up to 40 students, is equipped with two individually accessible IQTouch 65- or 75-inch touchscreens and its own small audio system including Kramer Galil 6.5-inch wall-mount and ceiling speakers. ‘Teachers have wireless Audio-Technica microphones and an iPad Pro, and there’s an Apple TV in each classroom,’ explains Oliveiro. ‘So, the audio equipment is for reinforcement of the teacher’s voice as well as media playback, eventually also from the students’ own devices, and, of course, central paging and the school bell.’

Each classroom AV system can be controlled locally via a separate touch panel, as well as from a central server, to power them off remotely or, with the Biamp system, to override the teachers. The system is coupled with the fire alarm and can display and sound emergency messages or other important information. Music, speech and drama rooms contain additional portable sound systems.

Simplicity is key for the users, yet it takes the teachers some getting used to, according to Nigil Antony, manager, audio visual and campus IT of GIIS. ‘Sometimes we’re getting the call “nothing is working”, only to find it’s due to the user. So, training the teachers is essential.’

All corridors are lined with Bose FreeSpace DS 16F ceiling speakers for paging. ‘Initially they were all to be powered from a central amplifier location,’ reports Palekar, ‘but we were able to replace this and the long speaker wiring with one amplifier located on each floor. We now have the benefit of 13 individually addressable zones on their own VLAN while staying within budget.’ 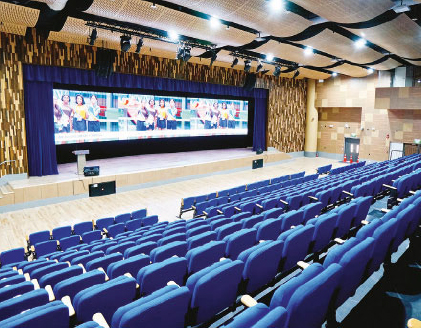 Large multi-purpose gymnasiums are available for physical and other activities and equipped with Kramer ceiling speakers and Biamp Vocia paging stations. The largest is a multi-purpose hall featuring a 278-inch Draper Ultimate Access XL screen and a 12,000-lumen Epson EB-G5150 projector which, being motorised, can both disappear into the ceiling when not in use. Audio, via playback or beyerdynamic wireless microphones, is dispersed by a pair of Tannoy VX15Q full-range speakers.

A lecture hall seating over 100 students offers video projection via an NEC NP-502 and a pair of Panasonic displays, as well as wall-mounted Tannoy VX 8.2 speakers in addition to the Kramer ceiling speakers. The jewel in the crown of the GIIS campus, however, is the multi-purpose performance auditorium, which can be used with a stage and 700 retractable seats for performances and presentations, as well as sports such as basketball and badminton.

On the stage, which is flanked by four JBL VRX932 constant curvature line array modules and an SRX728S dual 18-inch subwoofer per side, a curved CreateLED AirMAG-3 16.5 x 3m LED wall – according to GIIS the largest in a South East Asian school – has been installed for presentation display or performance backdrop. Five Panasonic AW-UE70 PTZ 4K cameras with remotely controlled pan/tilt/zoom mounted around the auditorium can capture any activity in the room.

Video and audio feeds are managed in a control room behind the audience, with a DataVideo switcher, Crestron touch panels and a Soundcraft Si Expression console among the key equipment. The feeds can be recorded, sent to the LED wall and loudspeakers in the auditorium as well as to any location on the campus, and streamed over the internet or to OB vans. 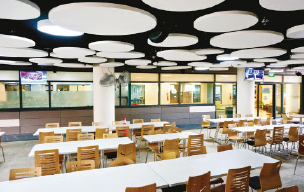 Grouped in zones, a large number of Kramer ceiling speakers and JBL and Tannoy surface-mount speakers are distributed throughout areas such as the visitor centre, event spaces, student canteens and catering spots. Digital signage is provided by around 200 Panasonic displays ranging from 32 to 75 inches in size, accessible locally and from a central server.

Server and software set up were carried out in close conjunction with Panasonic. The system is highly automated, based on pre-programmed routines to minimise manual control and maintenance. For instance, at the end of the day, all displays show the bus timetable along with directions, so students make it home safely. ‘School management is very much concerned about the kids’ transportation, and digital signage is playing a crucial role,’ explains Oliveiro. ‘The data is fed from a web server, and a user interface was developed for the bus coordinators to communicate when and from where a bus leaves.’

‘We were already busy on site while the building was still under construction, and this early involvement proved invaluable,’ recalls Palekar. ‘Considering the complexity of the systems, plus the fact that the initial design was already three years old and some products were not available anymore, we were able to contribute to the success of the project by introducing alternatives and even improve the experience.’

And with future expansion of the campus already in the planning stage, the experience at GIIS Smart Campus is in line for even more improvement.